For the Love of All That's Good...

...I will try to keep it short and sweet with pictures and captions. Last year, I just about wrote a book. Nobody needs that.=) I hope your season has been a good one. My highlights included having my parents and brother out to visit, making more homemade presents this year, singing and bringing cookies to the nursing home with a small group of moms and children. The following pictures give a taste of some of the time.

(When I asked Hanna recently if she would like to try to feed Aurelia while I cooked dinner, she eagerly said yes. All three of us were satisfied with the results.=)) 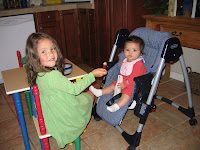 (Mid-December we made it to "A Walk Through Bethlehem" in Arvada. Last year I wanted to see it, but we didn't make it--probably due to me being busy with school and finishing grades. A church sets up the town as if it is the day/night of Jesus' birth. We, the crowd walking through, are the people who have traveled from far to be counted for the census. They did a great job giving a taste of the time. My favorites were seeing the camels, interacting with the townspeople, and finally the build up to seeing the stable at the very end.) 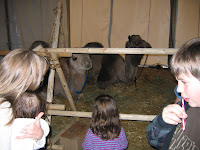 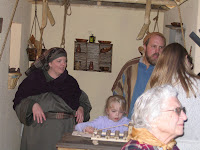 (I have to say...this was the funniest angel I have ever seen. In this serious moment where the angel is speaking to the shephards, I had a hard time not losing it seeing this teenage boy with big red hair.) 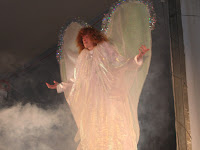 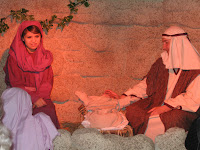 (We went ice skating with my parents, brother, my sister and her family indoors this year. I loved not having to drag Hanna around the rink; she was so much more independent.) 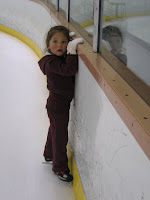 (I did take a lap with my two year old nephew, though, and I pretty much pushed him the whole way. He had a GREAT time, and I felt muscules in my back I haven't felt in a long time.=))

(Grandpa and Grandma with almost all of the grandchildren) 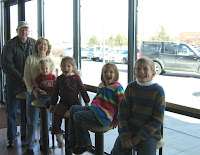 (A sweet shot of my sister and her family) 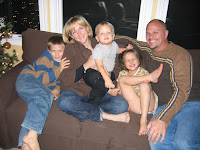 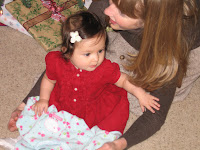 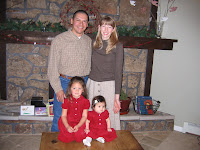 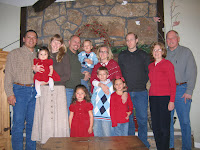 (Fairy houses that were made for Hanna, set up for Christmas morning) 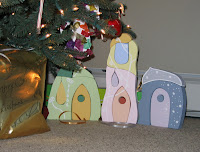 (Christmas morning shots: Right now, I PROMISE I will NEVER use this gag stocking again. I vow to buy real stockings for the girls next year.=) I got this as an elephant gift this year. It just made me smile and Hanna, too.=)) 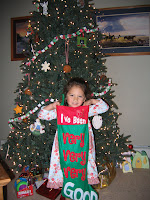 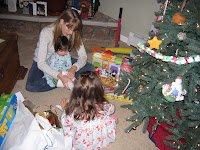 (I have to admit that glowworms scare me. Maybe they scare you alittle, too? I even suggested to David that he exchange it for another toy. But Aurelia is all smiles everytime it glows and plays music. I know that's what David was after.=)) 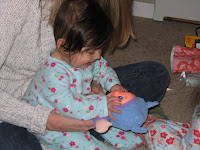 (The fairies have a home)

(Hanna with her new Bitty Twin--her cousin has the other. Thanks, Olivers!) 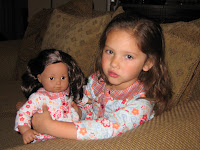 Look forward to hearing from you in the New Year!
Labels: family local travels