The Princess and the Pea

(our girl and her friend are sitting on the far right. children were encouraged to sit on the floor up front.) 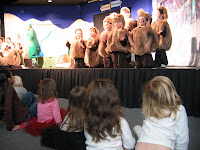 We took our oldest to her first play this past weekend! Several months ago, a good childhood friend Amy recommended this particular show directed by the Missoula Children's Theatre. She works for this theater company in Missoula, Montana, and the company travels all over the world organizing and putting on plays.

This play The Princess and the Pea was entertaining and very well done, especially considering how it was put together. Monday, before the performances, was auditions. Each evening following (Tuesday to Friday) was several hours of practice and rehearsing. There were two one-hour performances on Saturday.

The play was a spoof off of the tradition tale with lots of humor, silliness, and fun costumes. The actors ranged in age from 5 years to high school age. One of the chief play directors had a major role in the play, too.

I get a sense from our girl that she really enjoyed the performance and the exaggerated silliness and humor most of all. Because no flash was allowed, the pictures have blur, but it gives a taste of the fun.

(the princess and her pea, of course) 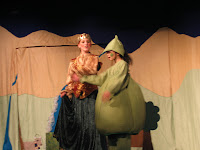 (the royalty and citizens from the kingdom of glacierdom) 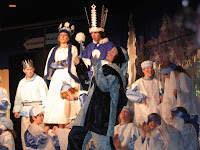 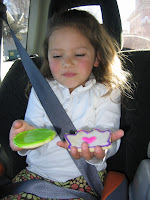