Sweet and a bit crazy, Espi and I are expecting again. Espi is 40, and we decided if we want more children, sooner sounds better than later. In March the pregnancy test was positive. The first trimester has been good with a little nausea, tiredness, extra sensitivity to coffee and foul smells, and computer-time grossed me out (I had this with our second, too; I know it's strange). With the second trimester beginning, it seems like much of that has subsided. My first doctor's appointment was last week at 14 weeks. All looks good so far. Espi hoped to make the appointment with me, but we had an appraisal scheduled for the same time. As I sat and watched the monitor during the ultrasound, I was asked if I was interested in looking at the sex "early." Sure--let's see what you got! All signs look like a boy is on the way. We will confirm the sex (if Baby cooperates) in early July though. In the meantime, we are having fun playing around with different boy names. 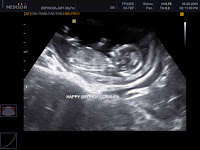 (my appointment was on my dad's birthday; so an extra touch was added to the image) 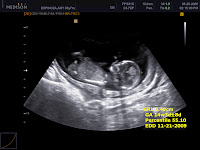 I felt the Little One move for the first time this week, as I smashed my belly into the tub bubbling-up the girls. I didn't know better with our first, and I felt her move around 17 weeks. With our second, I felt her around 14 weeks, too. 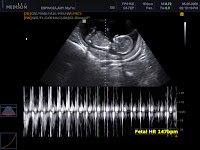 With a thankful heart, ready or not, here we go again!
Labels: ad