On October 28th and 29th, we accumulated two feet of snow!
H doesn't have snow pants, yet, but nothing stopped her from getting outside any chance we would let her to make boot-prints, snow angels, and taste snowflakes during the storm. With no snow in the sky on the 30th, both girls bundled up to play in the white-stuff as much as they wanted. 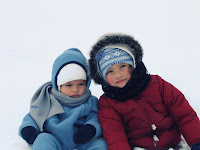 Scary #1) R's mentality and facial expression stayed pretty much like the picture the whole time!
H was climbing over drifts and sliding down mounds of snow that Espi had made plowing the driveway--having a ball!

The drifts can get pretty crazy out here.
Scary #2) The first drift is in front of the barn, the second was blocking our driveway, and the last drifts with R alone are on the other side of our barn.
Scary #3) With only long johns and sweats on, H played until she had soaked undies.
Snow pants needed pronto!

Weeks ago, H and I looked through costumes. Family Fun magazine had a bat hat that caught her eye.
Taking the Halloween role much more seriously this year, H said she could be the bat that flies into her sister's hair to scare her.
The holiday fun started the night of the 30th at a indoor harvest festival with games, prizes, costumes in abundance.

On Halloween, we headed to a small town, local, outdoor harvest festival for H's first taste of trick-or-treating (which is nonexistent living in the country).
Scary #4) As we walked the streets and visited businesses trick-or-treating, we saw a guardian of several elementary children letting the boys and girls drink water from the run-off overflowing from the store front gutters and sharing with business owners how her kids have been thirty all afternoon!
Uhhhhhh.
Altogether, H's Halloween loot fills about 3 mason jars; it will keep her happy for quite awhile! One of my favorite "treats" that she received was a toothbrush from a dentist office--very handy!

For the rest of Halloween, Espi enjoyed his Texas Longhorns and the girls and I made jack-o-lanterns and roasted pumpkin seeds.
Guess who wanted bats on her pumpkin!
The highlight of the evening was playing make-believe until bedtime with lighting dim and lanterns lit.