Getting Away from the Everyday (Part 3)

First off, realizing how long it has taken me to complete a post on a vacation, however LONG, is telling me that caring for three children, with two currently under the age of two, is catching up to me! Well, it was bound to happen. So without further ado:

Taking off from San Antonio area kept us on the road for 10 hours truckin' to a favorite Texas state park Palo Duro Canyon near Amarillo. It was a LONG day of driving made even longer by the discovery that the park was closing at 6:00pm, and we weren't going to make it. Talking to the park office, based on our location, we could expect to arrive about 15-20 minutes after the gate closed. The park ranger was so kind to say he'd stay late to let us in. This last stretch was quite painful: hungry and tried cries and whines abounding! But we arrived and survived.

Our camp site was perfect for the kids: lots of room to run around, tucked in a portion of the canyon wall, and next to a shallow stream. It felt so good to know that this was our "home" for a couple nights.

When sleep called that first night, Espi and I were up seven times with Little A. Teething, upset stomachache, or simply exhausted?? It was hard to figure, but surprisingly it didn't hold us back too much the next day. After breakfast, we took a favorite hike that ends overlooking the amphitheatre and with an amazing panoramic view of the beautiful canyon. The morning was warm, but cloudy and VERY windy. We toughed out the wind and were enjoying the hike until H turned to look at "Daddy" and her sister, tripped, and landed into cactus! Poor girl! Espi saw it happening and felt so bad that he couldn't stop her (Little A was on his shoulders). I pulled a needle-sized prick out and many, many hair-sized. It could have been worse, but it HURT. We were ready to turn back, but, surprisingly, H really wanted to continue. Fortunately though, the end of the trail was just around the bend. 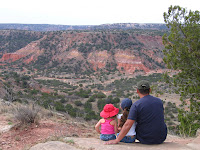 (near the start of our morning hike)

(at the turn-around, right after H's fall) 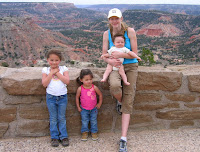 (with the kids at the visitor center's overlook before lunch::I can see the lack of sleep in my eyes!=))

After lunch and naps, we hiked one last trail...or better said, a small portion of one last trail! The sun was not hiding behind clouds now; so it was hot and still windy. So windy, in fact, that it looked like a dust storm was in the far distance above the canyon wall. We figured we'd hike for about an hour. 30 minutes in and 30 minutes out. And all the while, Espi and I dreamed of someday camping with family so that MAYBE ONCE we could hike or bike a trail IN FULL again while the kids played with Abuela or Grandma and Grandpa.=) 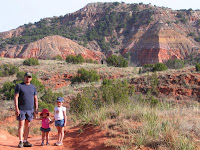 (near our 30 minute turning point, loving the color of the earth against the green trees) 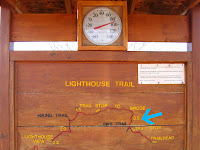 Wanted to show (above) the mileage on the trail and the arrow noting where we turned around. The last time we hiked A SMALL PORTION of this trail, we had only H. Both times, we turned around about the same point. We have some room for growth here!

In spite of the short distances hiked, we truly had fun. Thankfully, we all slept well our second night before heading home because our last day of driving was probably the worse yet with two unhappy babies. AD just wanted OUT, and A was so tired. H just took it in stride, that trooper. Texas gave us great adventures, but home was a sweet, sweet site. 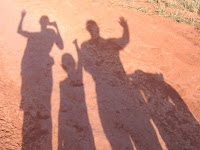