Getting Away from the Everyday

Graduation from swimming level "minnow" happened for H just A COUPLE hours before getting on the road for Texas. We were leaving a day earlier than planned trying to avoid the snow and cold that was expected all day the following day.

Soon we found out, too, that snow was expected at our first camping reservation in North Texas. We cancelled and decided to skip right to our second camp spot near San Antonio. We left that Thursday afternoon, and with a sleep-stop in between, we arrived to over-flow parking at a packed Garner State Park the following night at 10pm. Our reservations would begin the next day; so we settled into camper-parking-lot sleep relieved that vacation was READY TO BEGIN.

trees, glorious trees
Our first day at Garner was chilly and cloudy and kept us in the camper mostly unpacking and setting up. It was a still a welcomed, relaxing start.

early morning at the playground::girls exploring a massive, hollow tree::throwing and skipping stones
Our second day was cool but sunny and got us out to play and explore leisurely. 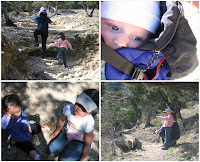 hiking the cliff
On day 3, we planned to hike the infamous cliff after breakfast. It was sort of ambitious with 2 tiny ones where no jog-stroller could venture, but we figured we'd just give it a try and see how far we could go. About 1/2 way up, Little A was a party-pooper, LITERALLY. I usually pack a couple diapers in the front pack, but I completely forgot! The "peak" wasn't going to happen this time, but we still saw a pretty view of the river and rolling hills. 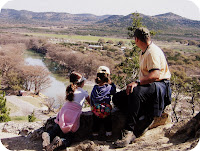 This view shot makes me laugh. Little A had a little romper under her pants and jacket. Once we "surveyed the damage" to see if the trip was "salvageable" (but no such luck!) Espi snapped her up with the romper over her pants, as he said, to keep it contained. 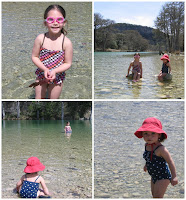 sportin' her new goggles::THE cliff is seen in the background::the cold water safely kept A at bay
After a diaper change...and lunch, we headed to the Frio (cold) River to get wet. The combination of COLD water and mid-70s took the "swim" out of our water play this year. Espi did go under all the way! and the girls both got wetter than me. We still had a lot of fun wading, playing catch, creating with rocks, enjoying the sunshine.

our river-side set up::attempts at paddle-boardin'::H's shot of "mom and dad" (no photo alterations--my legs really did match the white rocks and could be blinding if stared at for too long) 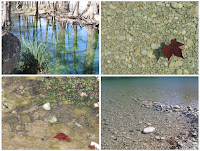 Have I mentioned? The water at Garner is the prettiest blue-green! And I think it could be just about the ideal place to swim with children.

At this point, we still have more hiking and water play in store before we head to see family the next day. For now, here is a clip of the girls warming up to the cold, cold water as they dip in for the first time:
Labels: distant travels videos