"You're a joy to us" starts a lullaby Grandma M wrote for Little A a year ago. This little girl lives up to that claim.

She sees humor all around her,
makes games out of much,
shares without questioning,
loves to hug and cuddle,
sings noises and her words often,
jumps, dances, and somersaults her way around a room.

She brings us many smiles and laughs. 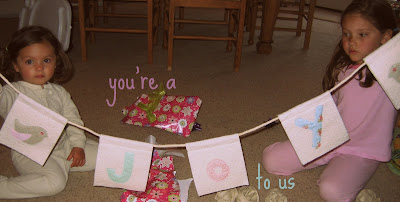 (the joy banner::Mom lovingly put the banners together when I saw the idea in Amanda Soule's Homemade Home) 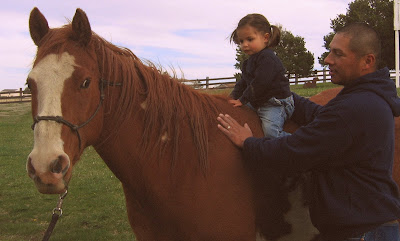 (taking in the size of big Ranger::although she sported a cautious face the whole time, she didn't want to get off) 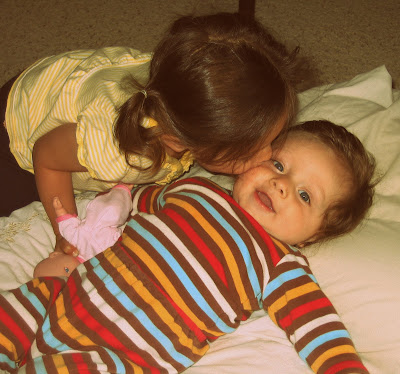 On the birthday morning, she woke up to balloons covering the floor and presents on the table. She opened one before breakfast. Then Espi, working from home, had a little something special planned for her soon after.

With H, he started a tradition on each child's birthdays to take a little time off work to do something special just the two of them. For A, it was a pleasant, sunny day so he decided to spend the morning with her at the park. But this year, being only 2, he thought bringing along "big sister" would make it much more fun. So the three took off for the morning. Cake, ice cream, and presents were had after lunch.

(her mix of presents included a sleeping bag, a mini broom, art supplies, and a softie::made a golden cake with vanilla buttercream frosting--please remind me to dry off berries VERY well if I ever use them as frosting decorations again) 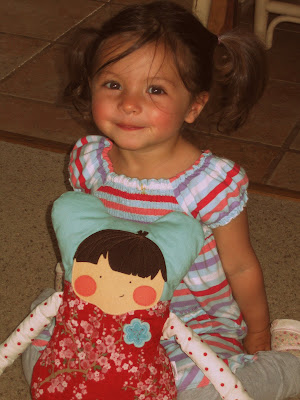 (with her softie made by Nicole Owen)

Then a little more dessert was enjoyed after naps. Then some more after supper. The tired, sugar-high girls tell all:
Labels: a home makes videos