Whole Lot of Playin' Goin' On

Maybe it's the temperatures dipping...

Maybe it's knowing that days of bundling up in coats will be here before long and feeling the warmth of the sun on our bare arms and legs soon won't be as pleasant...

...we have been outdoors or out-and-about more than usual these last two weeks...

with a blanket and books.

[Little A found my glasses in the grass, then shared her acting abilities.]

...on a mini road trip to downtown Denver. We played an alphabet game at the art museum--find something from a work of art that represents a letter of the alphabet--no art can be used more than once. H did great; only the letter "x" was empty by the time lunch called us away. I LOVE the quiet and peace of our country living, but I LOVE the hip shops, restaurants, architecture, and the simply-get-where-you-want-on-bikes of city life, too!

[the girls standing by the museum's massive broom & dustpan statue::the line of bikes downtown reminds me of college years getting around the bike-friendly streets of Ft. Collins]

...and evenings bike rides and strolls. We live on gravel roads, and the nearest bike trail is about 7 miles away, but it's a pretty trail--enough privacy from traffic and enough beautiful trees and growth along the way. 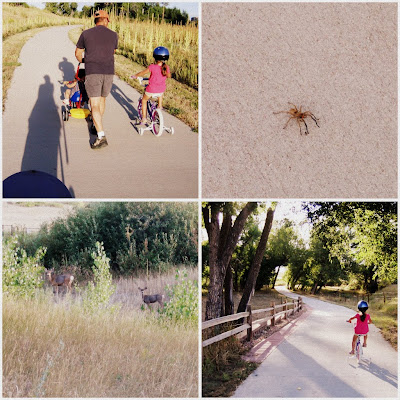 [all the kids had their wheels::spotted a spider the size of a quarter..ew::and a pair of beauties::H will be on two wheels before long!]

...just getting out our back door to play in the yard--playing catch (the record of 56 catches on Espinoza turf stands before the ball fumbled to the ground; we'll keep training), climbing fences, playing hopscotch, swinging, pretending to be animals then running off to make sandbox cupcakes,...or lounging in the grass and looking up at the leaves and the wispy clouds. 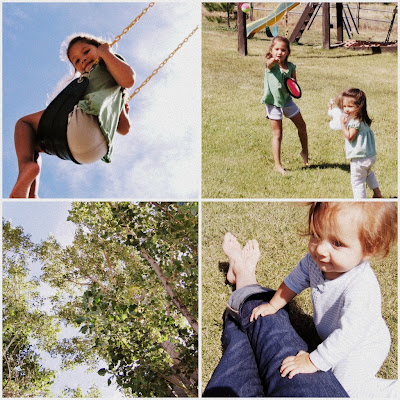 [AD claps and uh-ohs while A counts and sings]

...and, finally, being with Ranger and Spur has been our favorite. To get us all out with them once a week is a worthy accomplishment. But last week it happened twice with just us and once with friends included. Little A shows such peace on the geldings as we lead her around the arena. H is reigning (turning and stopping) beautifully while being led by Espi or myself. NO RUSH, but she is on her way to being an independent rider. 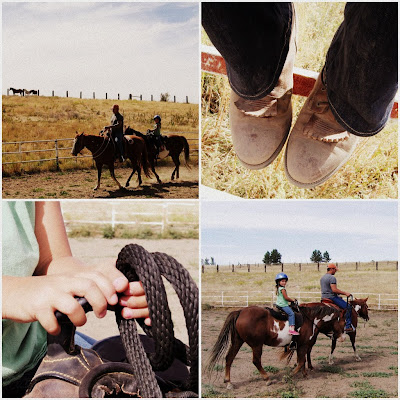 Fall is a lovely season, but I am not quite ready. Technically, we have about 2 weeks left of summer? Maybe that will be enough time.
Labels: home local travels videos