Rough night. AF and I burned the late night oil caring for her ear pain until the wee early morning hours. Then relief came, and we both got some sleep.

She is showing no signs of distress today. So thankful! And she and the rest of the mini crew have been having a great ole morning playing, pretending, listening to stories.

Not wanting to spread any yuckiness and wanting to catch up some on sleep with early naps, we cut off plans with friends today, giving the girls an unusually free morning to invite their "other" friends to a long awaited tea party. 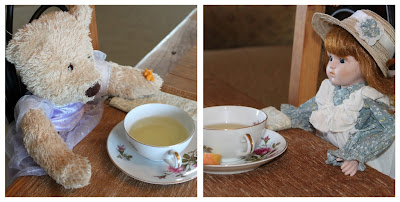 Since these were special guest, we broke out Great Grandma Luella's cups and saucers. When H saw the table set, her excitement came, "I've always wanted to do this!" And it was pretty to see Grandma's pieces out.

But we weren't ready, yet, according to H's standards. "We need flowers and music!"

A fake flower from her Abuela was just the right touch. As for music, I introduced her to Bach.

And the baroque lasted about half the time; then dance music was requested, but big band swing was accepted for the last half.

{Note: the dress code was unusually "loose" for this party, and AF took advantage of it.} 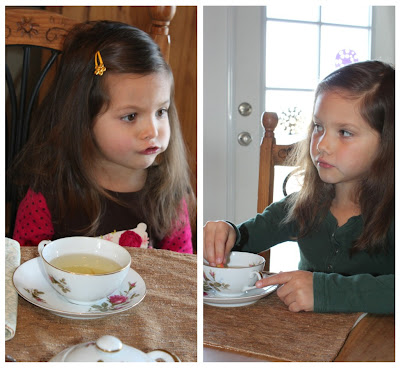 Party guests started with Mommy's old china dolls, newly named Lilly and Karrie. But these four girls were having such a nice time, they invited a couple other lovely guests to join in the fun, namely Minnie Mouse and Teddy Bear.

The tea party was a success lasting nearly 2 hours long, 3 small teapots full of chamomile tea, and the food kept coming: apple slices, bunny crackers, bread and butter and cheese. This party was a 2-in-1, lunch included.

Still enjoying big band swing now while 2 of the 3 Littles nap, and the house if very quiet. I have a feeling the girl will be out for much of the afternoon after last night, and maybe I can slip in a cat nap, too. That, or early bedtime please.
Labels: a h