In the midst of this unusually long trip, the plan was to take mini "vacations" over the course of the weekends and visit some places we rarely get to see pretty close to Abuela. Our first weekend was set aside for "the boys" (Espi and friends) to bass fish. That fishing trip didn't workout; so time was dedicated to tackle big parts of our project list for "Mom." A fishing day trip did get squeezed in by the end of the weekend though.

The next weekend, we took off for the Gulf of Mexico to spend one night at Mustang Island State Park. We rarely have been disappointed in our state park stays, but this park was added to our short list. All it had to offer was the beach, but theirs had no water access without drudging through at least 20 to 30 feet of seaweed. We were surprised to not find even a small portion of their beach cleared away for visitors to easily enjoy the water. We drove up the coast to Port Aransas and found a beach that still had some seaweed but much more accessible. The kids had a blast in the windy, 75 degrees weather. They played in the water close to 3 hours, longer than I expected, and were very sad to know we "already" had to get back to the camper for dinner and bathes. 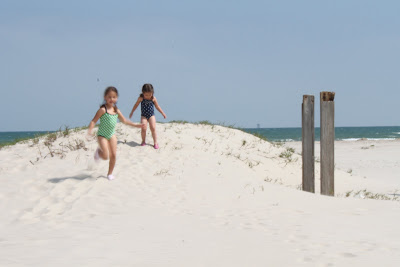 [The girls were so eager to get playing when we got out at MISP's beach and were so confused when we soon after told them to hop back into the truck because beyond these small sand dunes we discovered the masses of seaweed up and down the shoreline.] 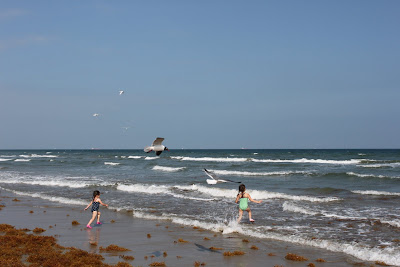 [off to the water in Port Aransas] 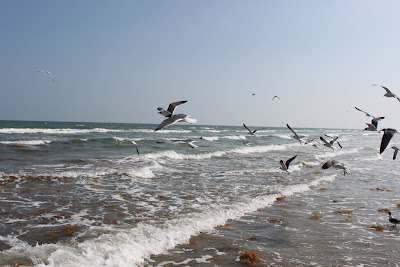 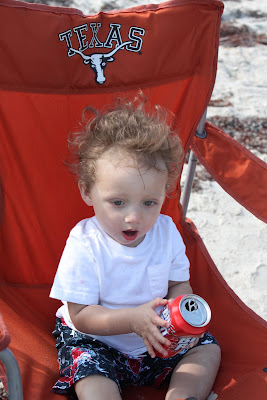 [mini-Espi: Longhorns, curls, Big Red. AD is just posing with Espi's empty can this time, but he gets his first taste of Daddy's much-loved-drink later in the trip.] 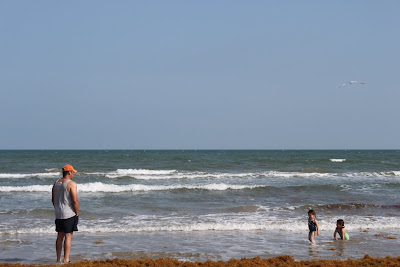 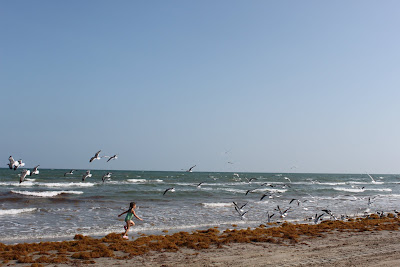 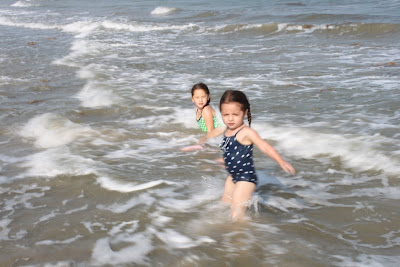 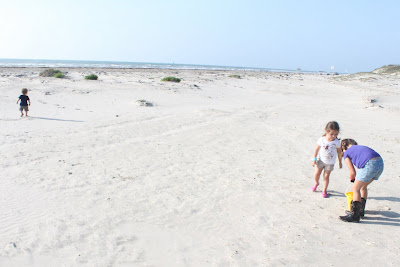 [The next morning after breakfast we did a little more shell searching right there on MISP's sand before heading off to our next destination.]

After the mass seaweed exposure and the pockets of sand found inside the girls' swimsuits folds, Espi and I were both pretty eager to head inland aways. We headed to Goliad State Historical Park, the site of an old mission with a fort and battle ground nearby. The history of this area is fascinating, sad, heroic; it's tied to the Battle of the Alamo and the several other missions in and around San Antonio. I am a sucker for Spanish architecture; all the simple, thoughtful details in practical beauty make me a happy girl. This small and peaceful park was a pleasure. 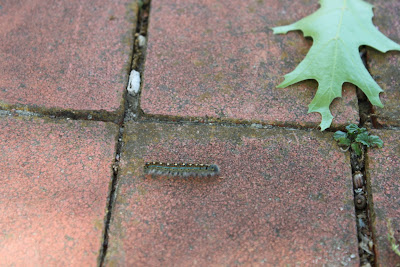 [Upon arrival to GSP, H spotted this little guy. The catepillar hunt never stopped. She begged me to take a picture!]

The walk through and around the mission was a highlight. It was a hot afternoon, though. Probably upper 80s. We stuck to the shade as much as possible. 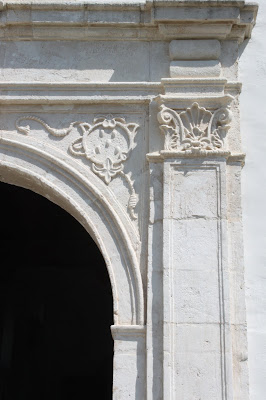 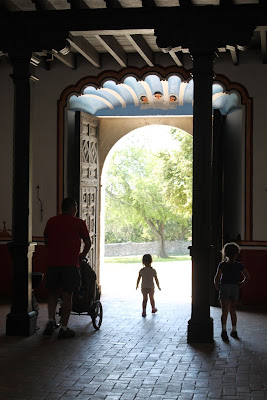 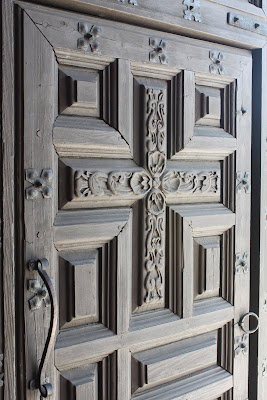 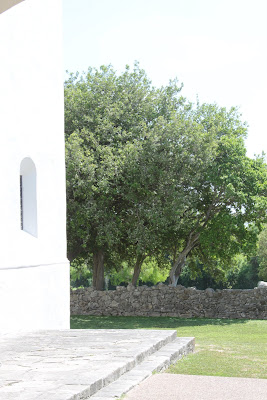 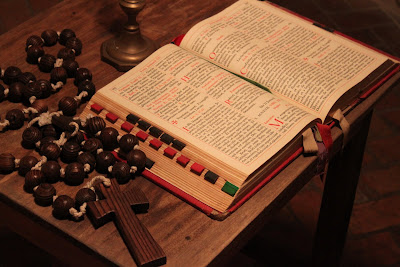 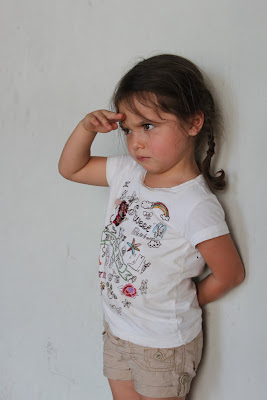 [Waiting outside after seeing the church and a small museum of artifacts. The girls already looked sweaty and tired. I teased them that I was going to take a picture of their exhaustion. Then she gave me this pose. She said she was a statue.] 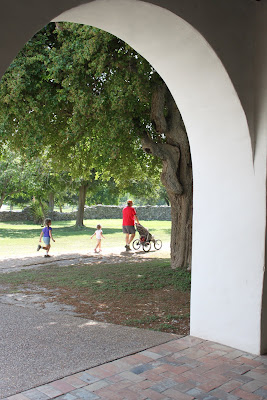 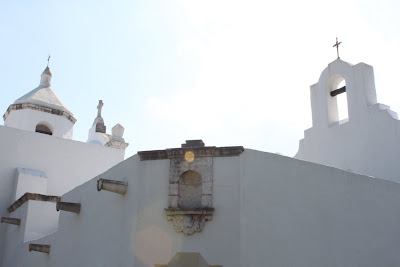 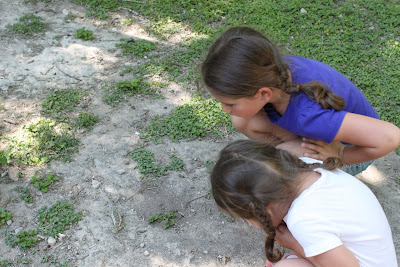 [The girls take a close look at a horned toad found in the courtyard.]

Next we toughed out the heat some more to see an old fort a couple miles down the road. A massacre took place in this area, and we visited the graveyard and a couple statues honoring military leaders and a herione of the time, too. 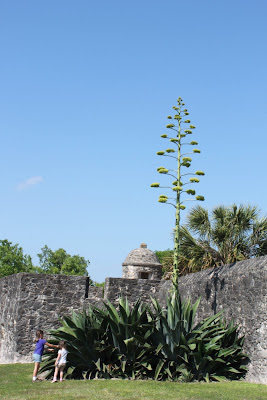 [walking the wall of the fort] 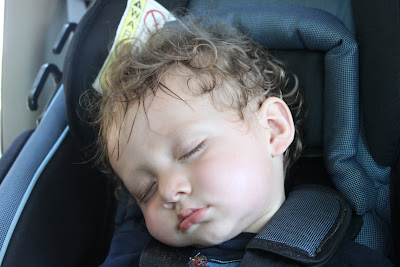 Secretly, the next plan was ice cream and finding a great park everyone was talking about for the kids. The park was called Sunfort, and it was next door to Dairy Queen. How fortunate! The surprise was a success. 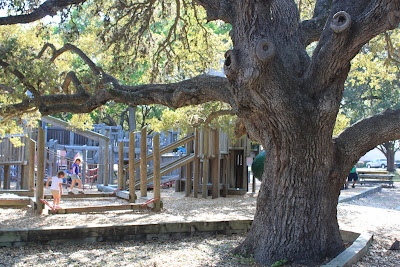 [The kids had such a ball at the park, we came back to play more the next day, too.]

Espi and I were both taken in by Goliad's history and small town charm and made time to walk the town square in the morning before heading back to "Mom's." One must-stop was the Markethouse Museum, which we heard had great local artifacts, and it did! Here, H asked me to pretty much record the whole museum by photos. "Mom, take a picture of this, too!" We all really did love seeing all the "old stuff." 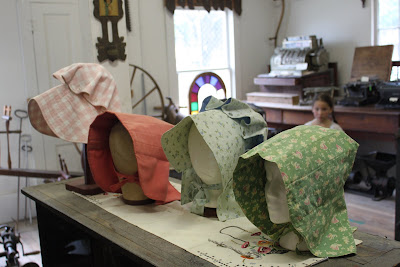 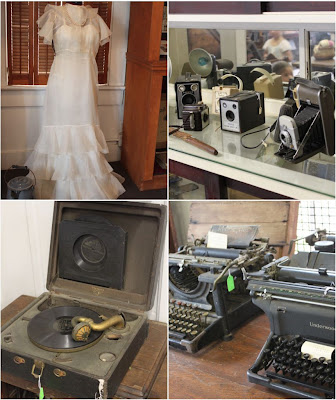 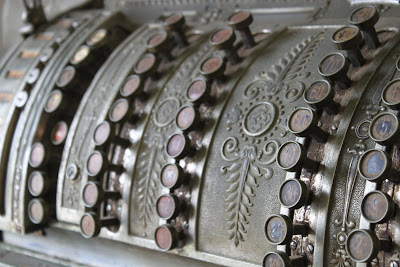 Next, we took a walk around Goliad's town square. Many buildings have been restored or are in the process. It's quite charming and filled with lots of sweet potential. Most of the time we just peeked in windows, but we did find one shop we really enjoyed. There, Espi wished we could take a $5,000 handcrafted, dining room table home. We both, also, really liked a print of a black and white painting of Mary, Jesus' mother for much, much, much less. With no surprise, we went the route of the print instead. 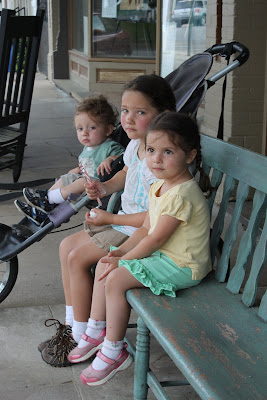 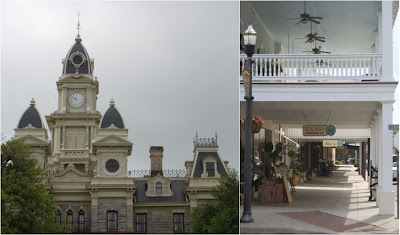 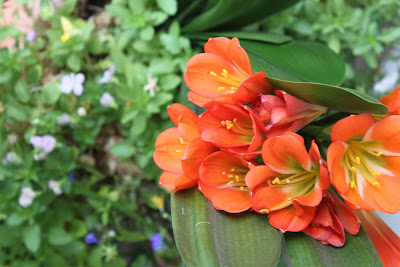 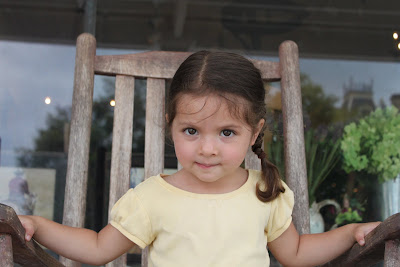 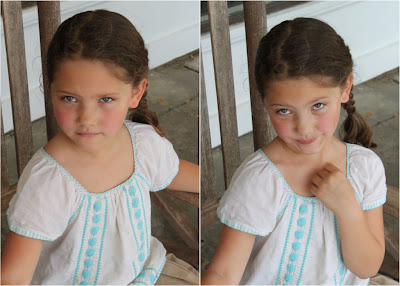 [Here the girls are waiting outside while Daddy buys our print. Love these sweet, fun, silly, little people.]

The drive home from Goliad was beautiful--rolling country, overcast weather with cattle grazing. A really lovely way to finish our special weekend "away."

And to Abuela's we returned to start our last work week in Texas...
Labels: distant travels family