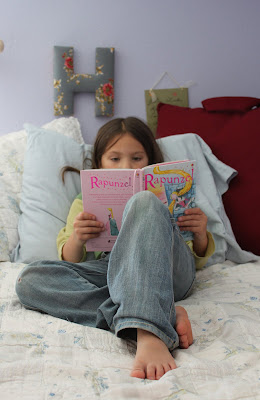 {H reads here during her quiet time. Tonight while I downloaded her videos, she was reading on the couch with AF and AD cuddled up beside her. Next time, I need to get a video of that.}

On her last birthday, we talked about the many special "firsts" she was going to experience this year, like biking, cartwheels, reading--really reading, swimming, lossing a tooth or two or three for instance.

She hasn't lost a tooth, yet, but she has shown lots of growth in 5 months:

{She and her cousin in Texas attempted cartwheels daily during our last trip in March/April. She's starting to get the hang of it. AF wanted to show off her moves, too, apparently.}


{During H's 3rd swimming class this May, her strokes started taking her places in the water. Next class, she is going to take off.}


{Espi took the training wheels off H's bike about a month ago. It didn't take long before she was off-roading.}