Guns {Not My Cup of Tea}

Some couples made time to see a show at the theater or time for a lovely, restaurant dinner by candle light. Espi and I this weekend made time for a gun class. Romantic, I know.

Does this make you uneasy? 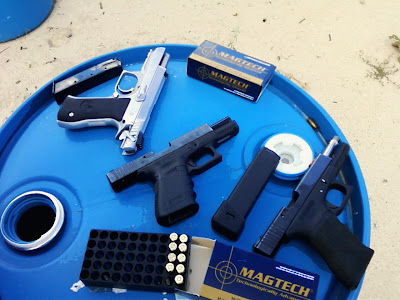 Up until this weekend, I had not shot a handgun--only rifles, mostly loaded with pellets and BBs and mostly between the ages of 9-13.

Over the years, we have heard stories, many involving wild animals, that got Espi and me talking about having a handgun, mainly for our mountain trips and camping outings.

I don't want a gun in our possession that I don't know how to use and keep safe. So what was Espi's interest became our interest.

Half the day was books, demonstrations, and discussions. The second half was at the shooting range. 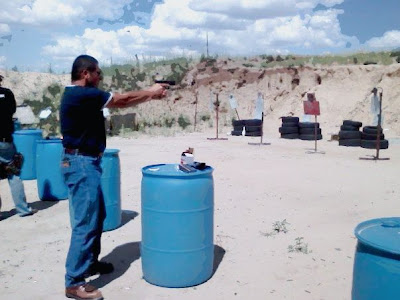 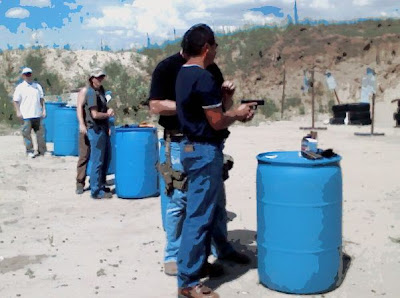 [Espi and the trainer stop to take a close look at the shrapnel caught on the outside rim of Espi's ear, leaving him a nice minor burn.]

From the book work, I was left wanting to know more about the laws, what protects me and what doesn't. That's another class for another time. The range was hard for me. I haven't been so tense, nervous, and unsettled in a long time. I was the least experienced trying to get a handle on my weapon while a line of men and women along side me were rapid firing and shrapnel was flying. I was out of my element and just didn't want to do something stupid and dangerous...and didn't want anyone else, for that matter.

Overall, our trainer was great. The men and women we spent the day with were a pleasure to be around. As you can imagine, I was the last to use up my ammo, so I got to enjoy shooting at the end with quiet and no shrapnel flying in my face--much kinder on the nerves. 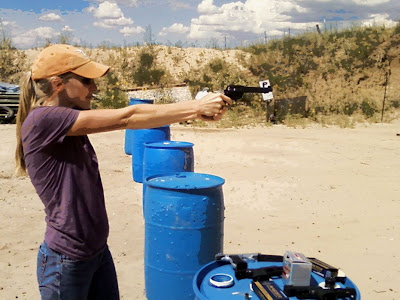 [I got the most comfortable with this Heritage 22 revolver.] 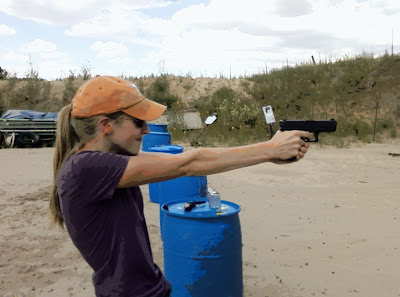 [Espi liked this light weight Glock 19 9mm; however, I had trouble with its recoil or kickback. The Baby Eagle (top picture) was the most comfortable 9mm for me because of its heavier weight, giving me less recoil and more control.]

As Espi and I drove home, I shared that my reservations in shooting rest in the fact that these weapons are incredibly accurate and, obviously, powerful even in the hands of someone inexperienced like me. The difficulty is being safe while becoming efficient. 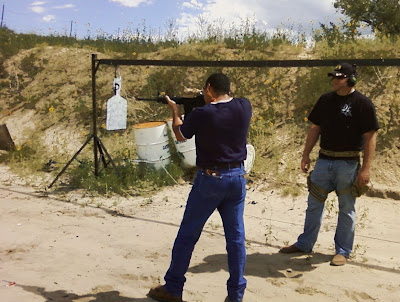 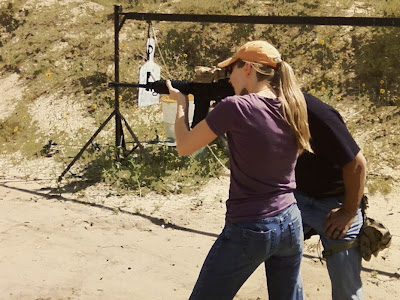 [For "fun," our trainer brought out a .223 assault rifle at the end of the class. Impressive, powerful, scary.]

Last night while lying in bed, I began thinking about the fear I experienced on the range. I was reminded of a quote I had read last week by Debi Pearl: "What physical pain is to the preservation of the human body, fear is to the preservation of the soul." Scripture says in Proverbs that "the fear of the Lord is the beginning of wisdom." Pearl added that "life without fear is a fool's paradise...How differently would we react to our daily challenges if we truly feared God [and His undeniable spiritual laws/order that rule in this world, such as 'sowing and reaping']?" All of the reflecting made me realize I need more of that fear I felt on the range for the Sovereign One who holds this world in his hands and to whom I am ultimately accountable for each part of my life.

Where will this gun training take me? As long as Espi has it apart of his life, I will want to get educated in safety. That's all I can say for now.

The Lord looks from heaven; He sees all the sons of men; from His dwelling place He looks out on all the inhabitants of the earth, He who fashions the hearts of them all, He who understands all their works. The king is not saved by a mighty army; a warrior is not delivered by great strength. A horse is a false hope for victory; nor does it deliver anyone by its great strength. Behold, the eye of the Lord is on those who fear Him, on those who hope for His lovingkindness, to deliver their soul from death, and to keep them alive in famine. {Psalm 33:13-19 }
Labels: lulu schooling