Villanueva State Park {Nestled in the Hills of New Mexico}

When our oldest was a wee one, we realized it was very painful getting a baby or toddler to take tent-naps in the heat of the day.

Our first, used fifth-wheel camper trailer was purchased soon after.

Tents may enter the picture again, someday...maybe...maybe not.

For now, we love seeing parts of our country by way of a camper.
On the way back from Texas this spring, we headed west to New Mexico before turning north for Colorado.

Our one regret was entering the park so late at night. We could tell the land around us was hilly and beautiful, but we couldn't see much by the light of the truck driving north on HWY 3 off of I-40. We made it in one day's drive from South San Antonio--14 hours! The kids slipped into their camper bunks that night wiped. Espi and I weren't far behind. 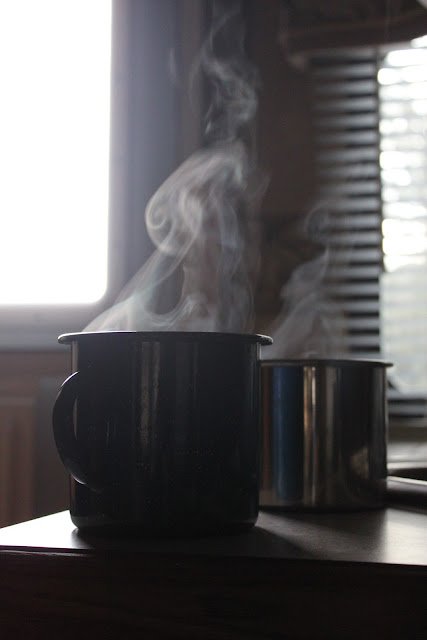 [a favorite way to start most camping morning, slowly...with a steamy mug] 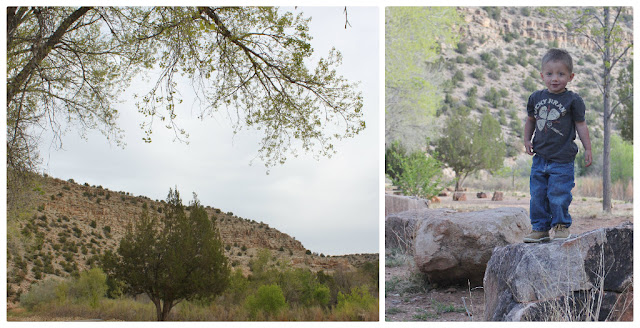 [We woke our first morning to see the rushing Pecos River 40 feet away and rock ledges on almost all sides of us.] 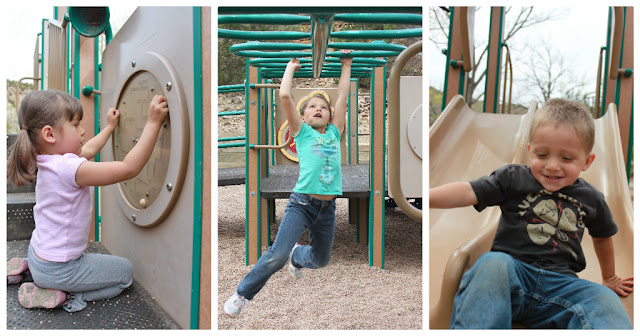 [After a full walk around the small grounds of the park, we tested out their playground, which is a camping must these days. H practiced her own version of "Wipe Out" Villanueva-style while the two Littles monkeyed around. This video captured some of the action that morning (that grandparents particularly may enjoy).]


The park ranger's office had a picture of special tapestry found in the Catholic church in the nearby village of Villanueva; so we drove to see the art work.Villanueva is a very humble, old Spanish village that to this day is considered "unincorporated." The land that surrounds it is quite breathtaking, but there is not much to the community. Didn't see a stop light. Didn't see a gas station. Just a little general store. 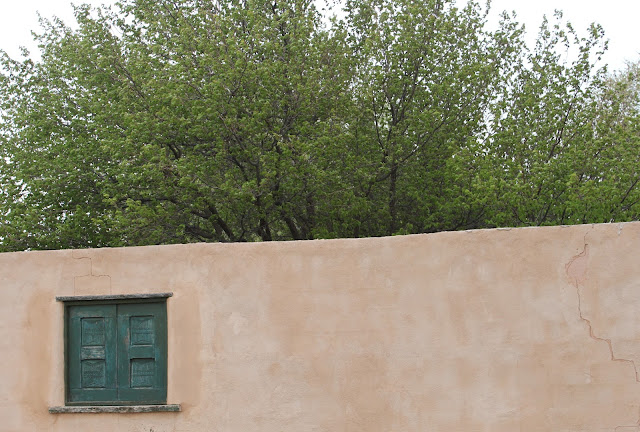 Our Lady of Guadalupe Church was an easy find, but locked. A kind, neighboring nun opened the doors up for a brief showing of the art inside. 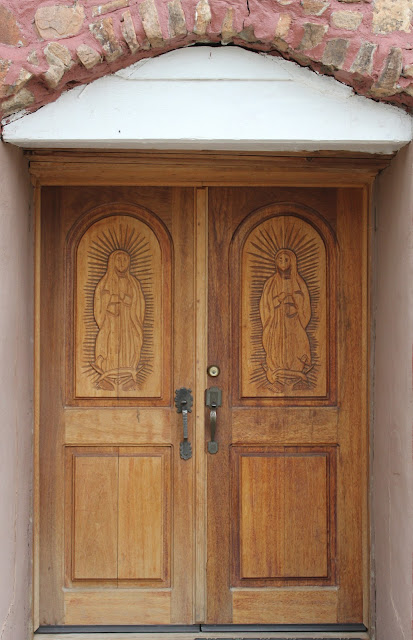 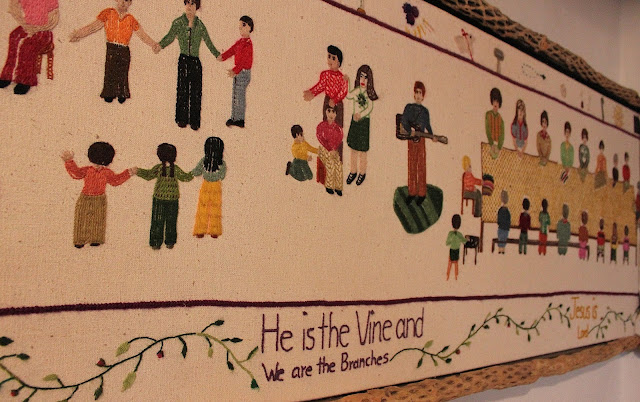 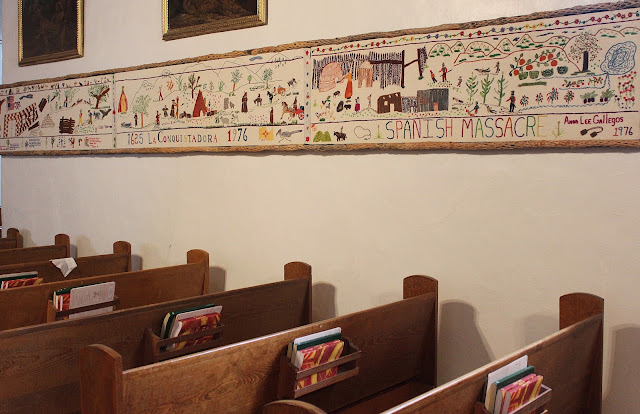 I wish I could capture the extent of it. It was like a wide, precious ribbon stretching across every side of the sanctuary. The tapestry even trailed up the stairs and around the entire loft. The "immensity of the project...was finished in 1976 as part of [Villanueva's] Bicentennial Celebration. [This]...document of the identity of a people...is 265 feet in length. Each of the 41 embroidered panels [is] the work of one of 36 different stitchers..." Thankful that "Sister" allowed me to take several pictures.

We returned from the village to have dinner and possibly take a leisurely hike to see some old Spanish ruins. Anyway, that was the plan... 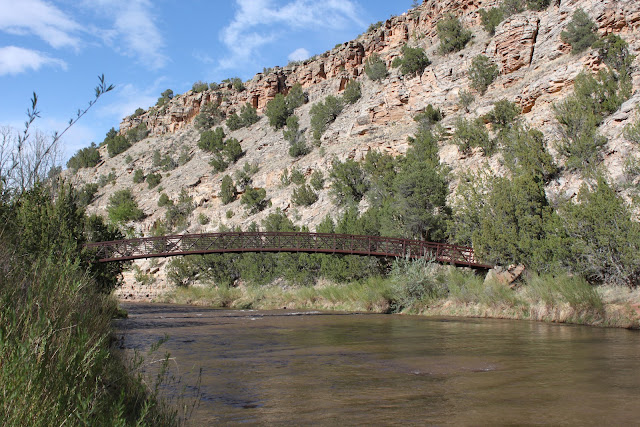 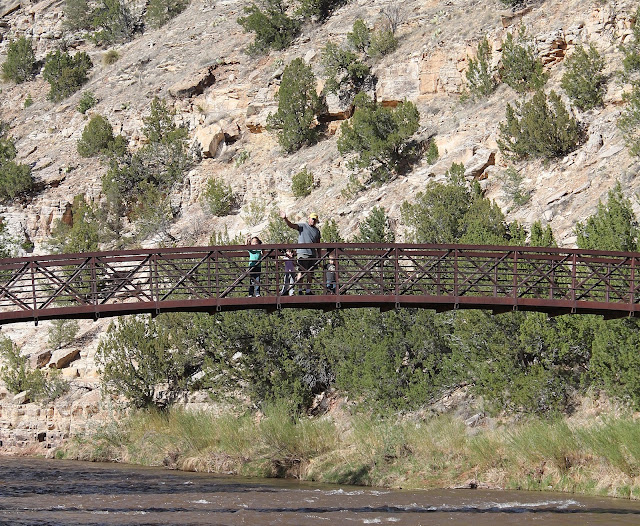 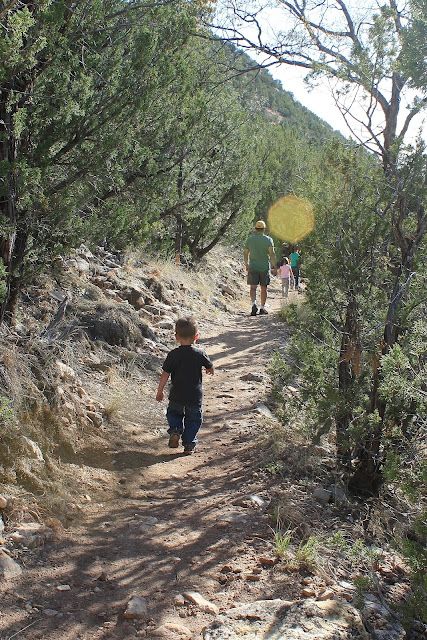 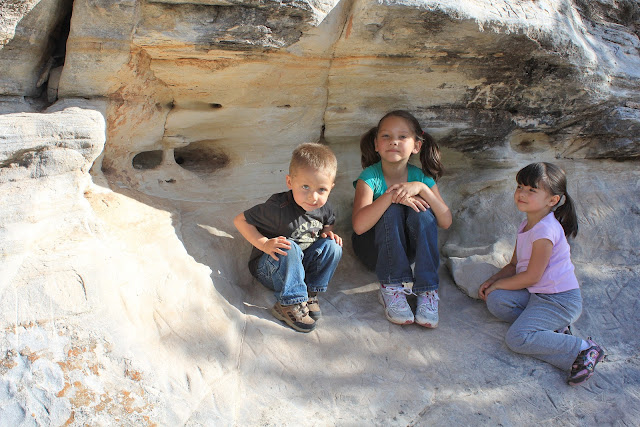 About this time, I was really OK to turn around. We saw the plot of land with ruins, the hike wasn't very leisurely for toddlers, and rain clouds were coming in. But the kids were go-getters and wanted to keep climbing up. 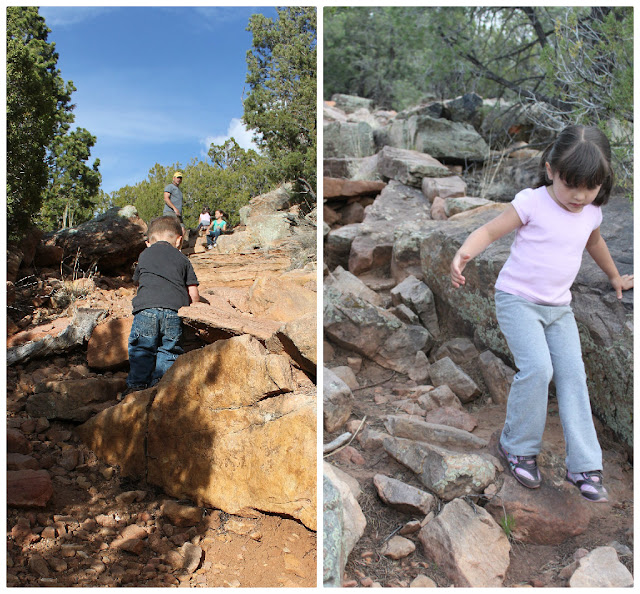 Does anyone remember Beirstadt?? I felt those same wimpy vibes coming back to me. It wasn't just Espi and me this time. We had three little ones with winds gusting and dark clouds around us atop a rocky ledge. We took a vote: turn back or keep climbing. Either way, it was about the same distance. I was out numbered 4 to 1. 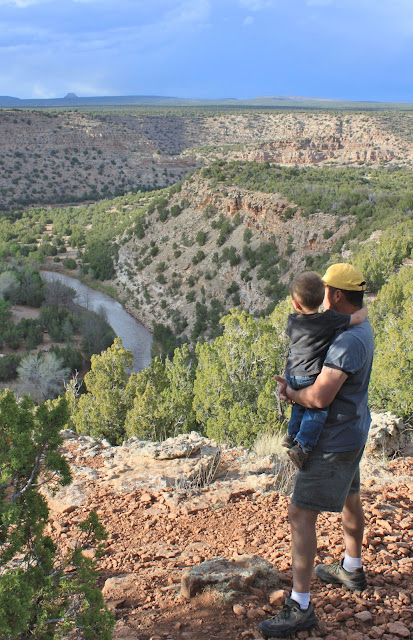 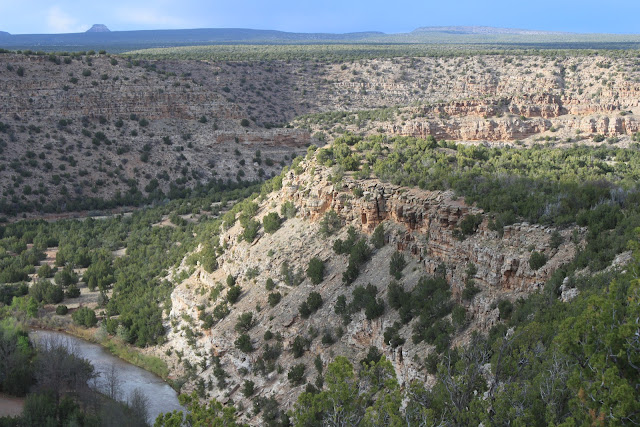 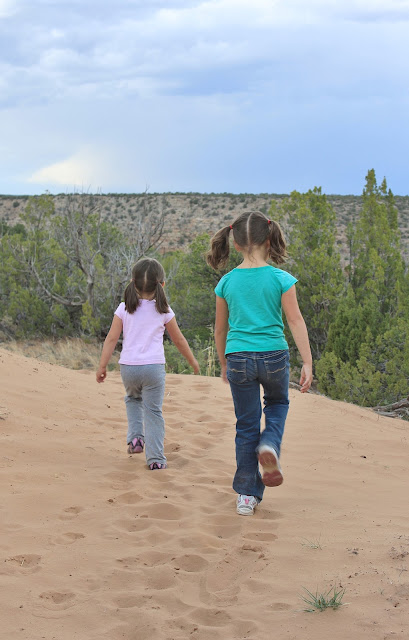 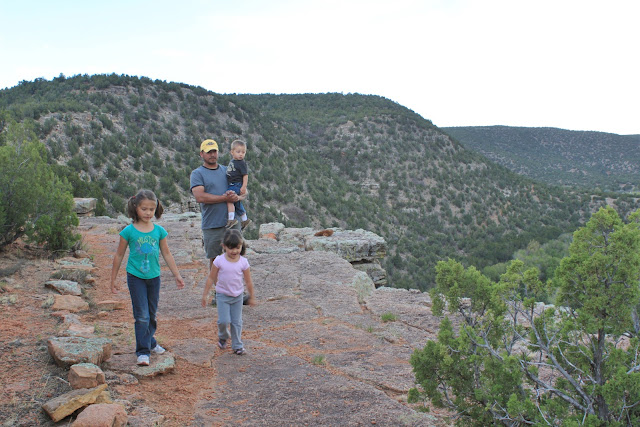 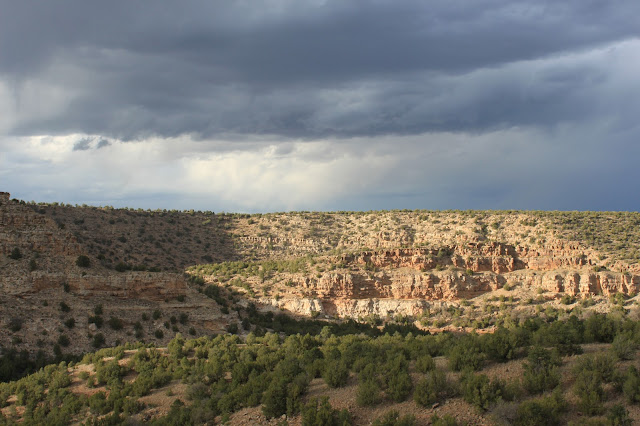 Sprinkles came and went several times. We survived--of course, we survived. And the views (with the dark clouds) were incredible! 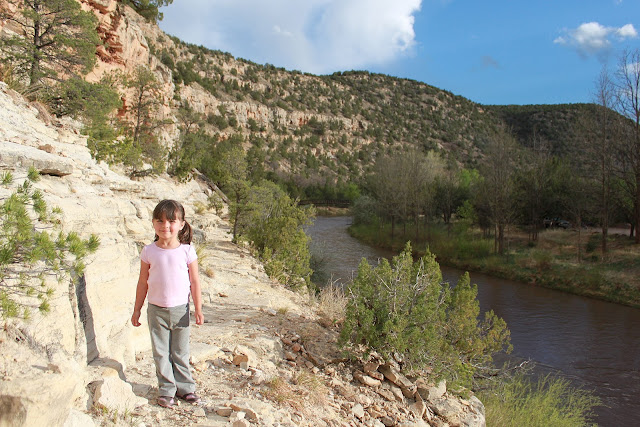 [Here we are in the home stretch of the trail. For good reason, I was nervous with Littles and a drop off into the water on the right, but we corralled them safely along. But, again, the view was lovely.] 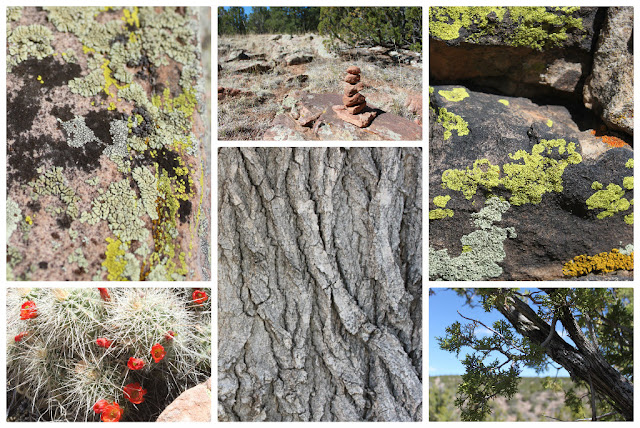 There are really only two hiking trails in the park. They were both fairly short. The next morning, we took off after breakfast for the last trail. 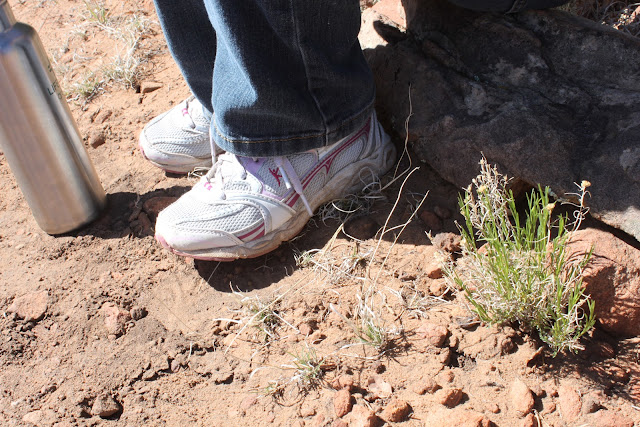 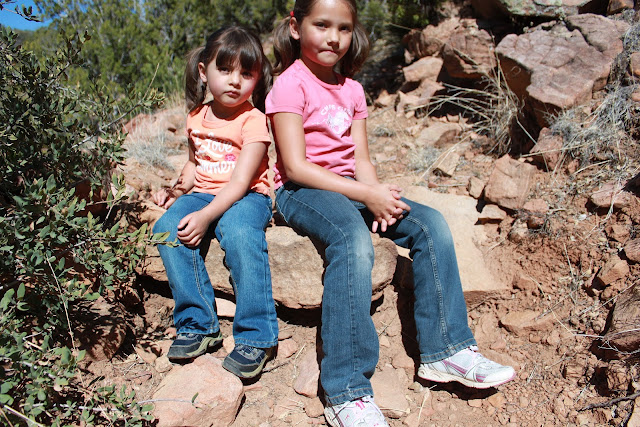 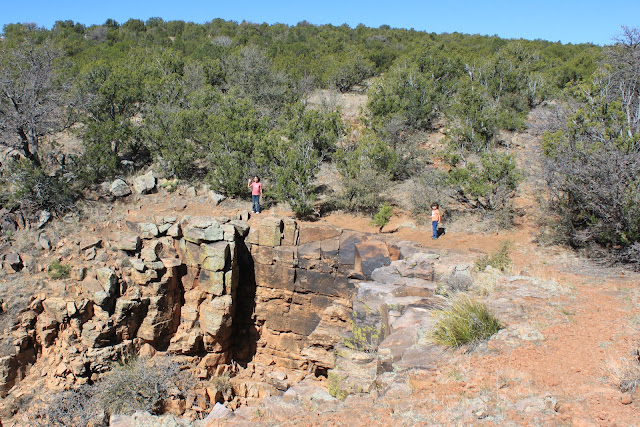 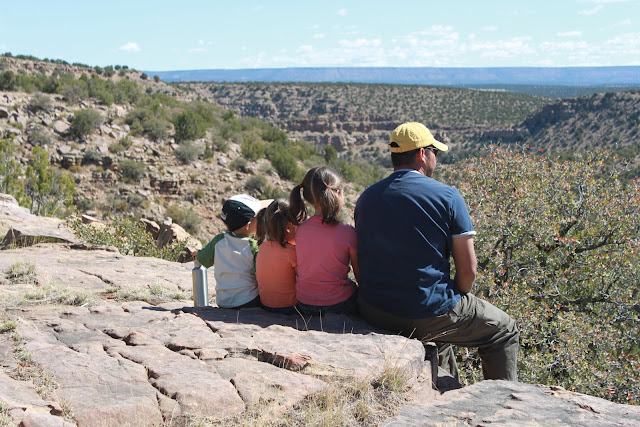 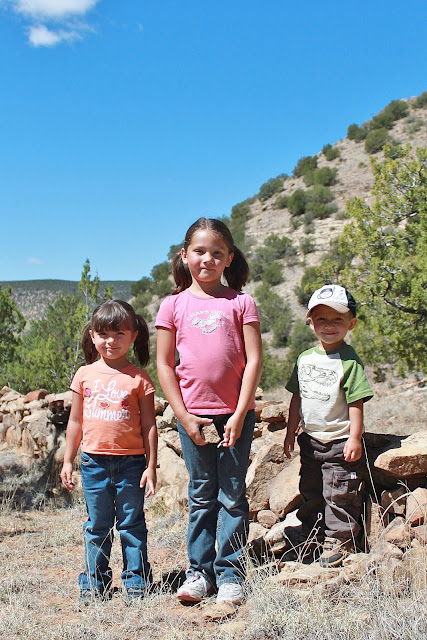 [I love how AD musters up the biggest smiles when he was the most tired. During both hikes, he refused to let Espi or me hold him. He was bouldering up the trails. Some of the rocks were massive (for him). Finally, on the ways down we were able to talk him into a rides in our arms for part of the time.]

Villanueva State Park was perfect. The little, old village, particularly the church and tapestry, was a rare sight. Thankful for another treasure found and shared together as family. 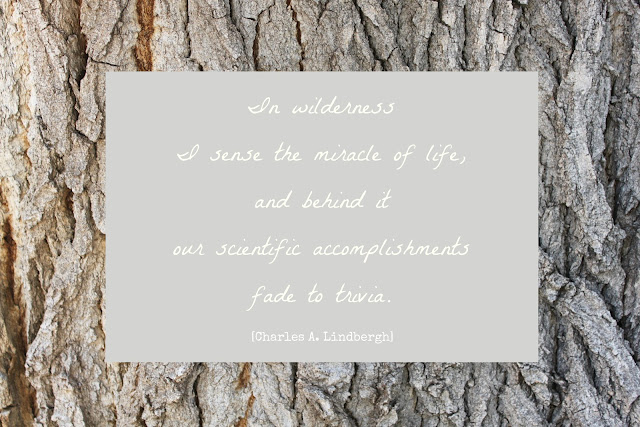